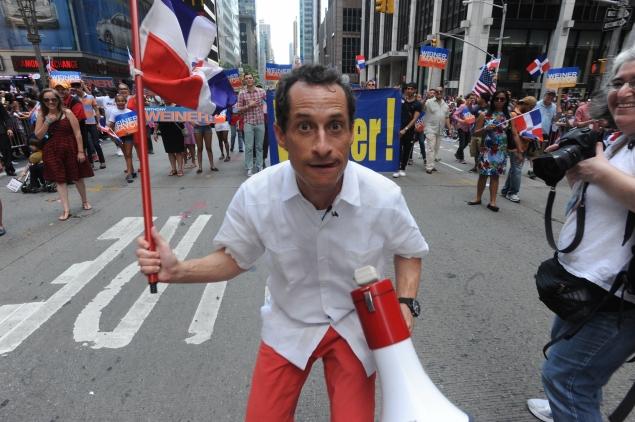 June is National Internet Safety Month, and in light of that the National Center For Missing And Exploited Children would like to remind us that the Internet  “may be used to engage kids in a sexually explicit conversation. Instant messaging interactions may go from an innocent conversation to a sexually explicit or otherwise inappropriate exchange.” To Congressman Anthony Weiner, this came as great news.

The Center also notes that “Kids may come across websites containing adult images,” such as, we now know, Congressman Weiner’s Twitter account.

That’s right parents, the creepy guy on the Internet who you’re afraid of your children encountering is actually a congressman.  As has been revealed this past week, the Honorable Anthony Weiner (yes, that’s his title, and yes, that’s his last name) has been discovered to have a bizarre infatuation with taking naked pictures of his Montgomery Burns-esque body, and sending those pictures to young females who neither he nor his wife have ever met.  This has created, amongst other things, a very significant danger that the Internet might crash from an innuendo overload on the blogosphere, as well as a catchy slogan for Weiner’s next election: “Congressman Weiner — That’s What She Said.”

Before Weiner was known for his wiener he was known for acting like one, as there had been little to distinguish him from every other mediocrity we send to Congress, other than his propensity for throwing infantile temper tantrums on the House floor.  In fairness, his congressional website reminds us that this paragon of virtue co-sponsored the Keeping the Internet Devoid of Sexual Predators bill, which “requires sex offenders to register their e-mail and instant message addresses with the National Sex Offender Registry.” This is information is then transferred into the “friends” list of Weiner’s Facebook account.

Also on his website you can view something called “Weiner TV” (if you dare).  Parental discretion is discouraged.

Of course, while there have been the perfunctory calls for Weiner’s resignation, nobody has really gone out of their way to condemn Weiner with much disgust.  Time Magazine’s Mark Halperin wondered aloud how Weiner could be so foolish, while gushing over Weiner’s intelligence, saying there is none smarter than him in politics.  One can certainly see why he’d say that.  After all, Weiner graduated from the prestigious Plattsburg State University, received a graduate degree from… nowhere, and has an employment history limited to being a Congressional staffer, no pun intended.

Politico columnist Roger Simon echoed Halperin’s sentiment, saying “It’s the very intelligence of these men… like Weiner — how bright they are, how quick they are, uh, how successful they are — that gives them a sense of invulnerability, that nothing bad could really happen to them because nothing bad ever has.”  But intelligence is not the issue.  What Weiner did, all cretins who act like him have done, is not stupid, or dumb, or a lapse in judgment. It’s degenerate. It’s predatory. Just once I’d like to see one of these sleazy narcissists give a press conference after being caught, where instead of saying how sorry they are for their lapse in judgment, they simply admit to being a pervert.

This is more of a problem than most people realize.  We’ve lost our collective disgust, and the reason we’re no longer disgusted is that we’re no longer surprised.  Be warned, a nation finds itself at a dangerous crossroads when scandals are not even all that scandalous anymore.  When society is overrun with depravity it has two choices: treat it as normal, or condemn it wholeheartedly.  Condemning it leads to redemption.  Normalizing it leads to perdition.

But it’s not normal.  Normal people do not take pictures of their naked body and send it to people they’ve never met.

Unlike Senator Larry Craig, a normal person doesn’t attempt to engage an undercover officer in an illicit act in a public bathroom stall, peering into the stall occupied by the officer, reaching his hand into the officer’s stall several times, rubbing his foot against the officer’s foot in the next stall, and then offering the historically spurious excuse that he has an usually “wide stance when going to the bathroom, and that was why his foot may have touched the officer’s.”

Unlike Congressman Mel Reynolds, a normal person does not get convicted of twelve counts of sexual assault, and then run for Congress again.

Unlike Congressman Mark Foley, a normal person does not text messages to underage boys soliciting oral sex, or asking for pictures of his genital.

Unlike Congressman Barney Frank, a normal person does not spend eighteen months living with a male prostitute psychiatric patient who operates a prostitution ring out of their apartment.

Unlike Congressman Chris Lee, a normal person does not send a shirtless picture of himself flexing to a woman on Craigslist.

Unlike Congressman Henry Hyde, a normal person does not have an affair at all, much less one he refers to as a “youthful indiscretion,” even though he was forty-one at the time.

Unlike John Edwards, a normal person does not cheat on his wife while she’s suffering from terminal cancer, deny parentage of the child born to the mistress, and then try to minimize the whole thing by pointing out that his wife’s cancer was in remission at the time.

And we could go on and on.

These people are not just degenerates, they are unusually degenerate.  They are uniquely degenerate.  And it does matter.  It matters that the people who make the decisions that govern our country are mentally deranged.  It matters that those who seek to control our lives cannot control themselves.  Our rulers should not simply be as good as us, they should be better than us.  If not, what moral authority do they have to rule us?

Congressman Weiner says he will not resign.  Of course not.  Resigning would be honorable.

Regarding the passage of his aforementioned Internet safety bill, Congressman Weiner lamented that “Sadly, the Internet is the predator’s venue of choice today.”   No, it’s not.  The halls of government are the predator’s venue of choice today, and the result is a moral decay that is permeating this nation.  So the next time one of our rulers is caught in a sex scandal — I think one is scheduled in about six weeks — let us make this pact.  If we can’t bring ourselves to be surprised, then at least let us be disgusted.