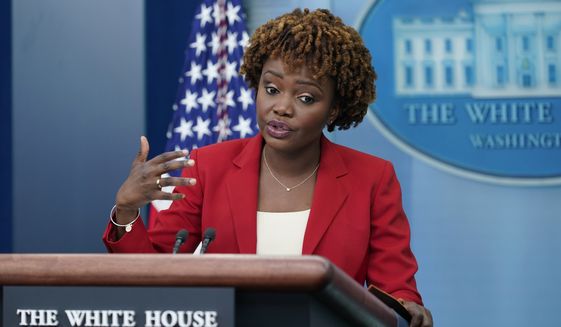 Who is better at their job than White House Press Secretary Karine Jean-Pierre?  I mean it.  Mock her if you must, but the joke’s on you.  You wish you were as good at your craft as she is at hers!  The woman is a generational talent!  Nobody, and I mean nobody excels at their job like Karine Jean-Pierre, which, in her case, is to absorb question after interminable question from reporters without ever giving anything even resembling a credible, coherent answer.

She has it down to an art, this Vincent Van Gogh of “I don’t know,” and at every press briefing she paints a new masterpiece.  Show me one reporter who’s been able to break through her masterfully vacuous brushstrokes.  Show me one who’s been able to find any meaning in her abstract expressionism, to get any accusation, or any policy failure, or any question about anything past her and onto President Biden.  It’s like trying to make sense of a splatter painting.  It hasn’t happened because it can’t happen, and it never will.  She is plausible deniability personified.

Basic questions about current events strike her as though the topic were chosen at random, like the categories on Jeopardy.  Did you ever have those nightmares where you’re taking a final exam and you don’t recognize anything on the test?  That’s her with almost everything.  She is forever the last to know, if she knows at all, to the point that it often seems as though she’s there to be briefed by the reporters rather than the other way around.  Who else has been able to so adeptly turn the tables on their adversaries like that?  She’s not just better than her predecessors, who all too often did their employers a disservice by giving credible responses subjectable to scrutiny.  Karine is revolutionary.  You can’t ever scrutinize the Administration due to anything she says, because she either says nothing, or something so laughably uninformed as to not be taken as the authentic position of the Administration.

Oh sure, at first, I wondered too about the wisdom of the Biden Administration in selecting her, as she forever seemed so far out of her depth that she might as well have been at the bottom of the Mariana Trench.  But then I recalled an essay authored by Tom Wolfe, the greatest American writer of the twentieth century, titled “Mau Mauing the Flak Catchers,” in which he detailed his experiences observing interactions at welfare offices in San Francisco in the 1960s.  He wrote that locals from various grievance groups would come to the offices to confront and antagonize the bureaucrats who worked there, a practice Wolfe called “Mau Mauing,” named for the militant Kenyan group that would try to intimidate and terrorize their British occupiers.  In the welfare offices, Wolfe wrote, the ritual went something like this: the locals would show up in groups with their grumbles and their gripes, exuding an air of intimidation about them, whereupon some random bureaucrat would come out from behind the plexiglass to meet them, and say something like:

And the group would pelt him with questions and complaints about whatever happened to be bothering them that day, really just to get attention, and the guy would listen and give hollow answers and half-hearted assurances about looking into this and getting back to them on that, and the group would eventually tire of it all and disperse, and nothing would happen, and they’d come back some other day and do it all over again.

Eventually, there came a point where Wolfe, observing the bureaucrat, had an epiphany:

“And then it dawns on you, and you wonder why it took so long for you to realize it. This man is the flak catcher. His job is to catch the flak for the number one man. He’s like the professional mourners you can hire in Chinatown. They have certified wailers, professional mourners, in Chinatown, and when your loved one dies, you can hire the professional mourners to wail at the funeral and show what a great loss to the community the departed is. In the same way this lifer is ready to catch whatever flak you’re sending up. It doesn’t matter what bureau they put him in. It’s all the same. … Whatever you’re angry about, it doesn’t matter, he’s there to catch the flak. He’s a lifer. Everybody knows the scene is a shuck, but you can’t just walk out and leave. You can’t get it on and bring thirty-five people… and then just turn around and go back. So, might as well get into the number.”

That’s the Jean-Pierre epiphany.  You think she’s terrible at her job?  No way!  Jean-Pierre is the perfect flak catcher.  She’s not there to give answers, she’s there to not give answers, and nobody does it more credibly than her.  She knows absolutely nothing, and you know it, and she knows it, and the reporters too, and if there were any doubt, one need only behold the massive binder of notes she hauls to her briefings, State’s Exhibit A, admissible in any court, physical evidence demonstrating a giant deficit of knowledge at least five inches thick.

You might think this a source of great frustration to the members of the press.  You’d be mistaken.  They’re not there to get answers, any more than the folks at the welfare office really expected to get answers.  They’re there for the show.  They’re there to beat their chests and rattle their sabers and advance their own celebrity, and get their face on their own network’s broadcast that night, even if only for a few seconds, asking questions that she can’t answer, and she happily obliges.

And so they’ll continue to play this silly game time and again, and the reporters, those members of the fearsome forth estate, will bang their drums and clang their swords and throw their phony flak for attention, and Karine Jean-Pierre will catch it, or let it hit her, and discard or deflect it a safe distance from the President, and we’ll all be none the wiser.  Which, of course, is the entire point.