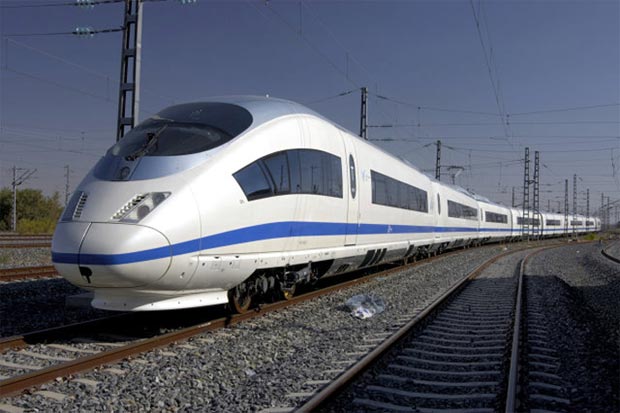 Joblessness is near ten percent, the national debt is approaching one hundred percent of our entire gross domestic product, and more and more states and municipalities are facing insolvency.  But those troubles are apparently too difficult for our government to solve, so our President has instead chosen to tackle the non-problem of our trains travelling too slowly.  And because the only solutions he can ever devise involve wasting massive sums of money, his administration proposes spending $53 billion that we don’t have in order to develop new high-speed rail lines between cities that do not need them.

This latest Great Idea out of Washington carries any number of problems.  First, in addition to it running the federal government deeper into debt, the new project requires state contributions.  But many of the states that these trains are targeted to operate in — New Jersey, New York, and California — are effectively bankrupt.  New Jersey already cancelled one tunnel project (the ARC Trans-Hudson Passenger Rail) that was partially financed by the federal government, because the state simply did not have the money to complete it, and the connecting destination, New York, suffering from its own budget problems, refused to pitch in.

Secondly, there are very few connections for which high-speed rail would actually shorten trip time.  Shorter connections are almost always quicker door-to-door by car (factor in that cars take you precisely where you want to go, and leave when you want, whereas trains operate on a schedule and drop everyone off at a central location).  Longer connections, conversely, are almost always quicker by plane.  Even in the few intermediate routes where high-speed trains would make a difference, studies have shown the difference to be negligible, and in any event, even the fastest trains cannot avoid the most obvious problem associated with rail travel: once you arrive, you have no way to get around other than walk or rent a car, which you simply could have driven.

But liberals ignore the obvious, because to them, high-speed rail is not really about creating an efficient alternative method of transportation; that’s merely the pretext.  This is really more about ideology.  Liberals are group and government oriented, which is what trains represent.  Trains group all manner of people together into one cohesive unit, and transport them on vehicles controlled by central planners.  Individuals are reduced to cogs in a great machine, boarding and disembarking on a schedule, and travelling at a predetermined speed.  Cars, on the other hand, are individual and private, which liberals hate.

Cars represent independence.  You can get in your car and go wherever you want, on your own schedule, and make any changes to your trip on a whim.  No central planner need be consulted.  But liberals have a dependency agenda.  Liberals need people to need government, because otherwise, government control becomes less necessary and less justifiable.  Put another way, cars represent self-reliance, but liberals cannot stand self-reliance, because self-reliance obviates the (supposed) need for liberalism, which posits that people cannot manage themselves, hence the need for liberals to control our lives.

Also, cars demonstrate class differences, which liberals abhor.  To travel on any street or highway in America is to see the effects of capitalism, free trade, and individual self-expression. Wealthier people can drive newer, nicer, more expensive cars, whereas poorer people have to suffer the false indignity of driving in older, cheaper models.  Liberals cringe at this public display of disparity because they value equality above all else, and therefore hate the personal accumulation of wealth (by anyone other than themselves).  Wealth, of course, means independence, and if some people are less dependent than others, then we cannot all be said to be equal.

But trains are a great equalizer.  Most trains look basically the same inside and out, and on the train, rich and poor alike sit shoulder to shoulder, all travelling at the same speed, in the same vehicle, in the same direction, with little to distinguish themselves other than their clothes.  Individual identity and class distinctions are minimized, because all onboard are subject to the same conditions.  This is liberal utopia.

And finally, it must be said, liberals have a bizarre, almost pathological affinity for exorbitant government programs that the market will not support and that consistently lose money, and there is perhaps no greater example of this than Amtrak.  Since its inception in 1971, this government-owned money pit has consistently operated at a loss year in and year out, and even its former president, David L. Gunn, has conceded that it will likely never be self-sufficient.

High-speed rail is Amtrak on steroids.  It’s not hard to see why liberals are so infatuated with it, and why the rest of us should be wary.

Guess they want more of this rioting . Hey San Fran cisco rioters Pelosi has tons of top line ice cream why don't you pay her a visit I'm sure she will share ! It has to be hot there .

LA is a shithole and will go down in flames!

Most funding cuts are for youth programs, educational & cultural

Apparently only some lives matter

Civil war is just around the corner!!!!

Good god. Dont disagree with the leftist narrative at all or you'll be blacklisted.